Washington says it will ‘respond decisively’ if Moscow uses nuclear weapons in Ukraine.

The United States has warned of “catastrophic consequences” if Moscow were to use nuclear weapons in Ukraine, after Russia’s foreign minister said regions holding widely-criticised referendums would get full protection if annexed by Moscow.

Votes in four eastern Ukrainian regions, aimed at annexing territory Russia has taken by force mostly since its invasion in February, were staged for a third day on Sunday. The Russian parliament could move to formalise the annexation within days.

Zelenskyy ‘shocked’ by Israel’s failure to give Ukraine weapons

By incorporating the four areas of Luhansk, Donetsk, Kherson and Zaporizhia into Russia, Moscow could portray attempts to retake them as attacks on Russia itself, a warning to Kyiv and its Western allies.

The Russian annexations raise the risk of a direct military confrontation between Russia and the NATO military alliance as Western arms are being used by Ukrainian troops.

US National Security Advisor Jake Sullivan said on Sunday that the US would respond decisively to any Russian use of nuclear weapons against Ukraine, and that it had spelled out to Moscow the “catastrophic consequences” it would face.

“If Russia crosses this line, there will be catastrophic consequences for Russia. The United States will respond decisively,” Sullivan told NBC’s Meet the Press news programme.

The latest US warning followed a thinly veiled nuclear threat made last Wednesday by Russian President Vladimir Putin, who said his country would use any weapons to defend its territory. 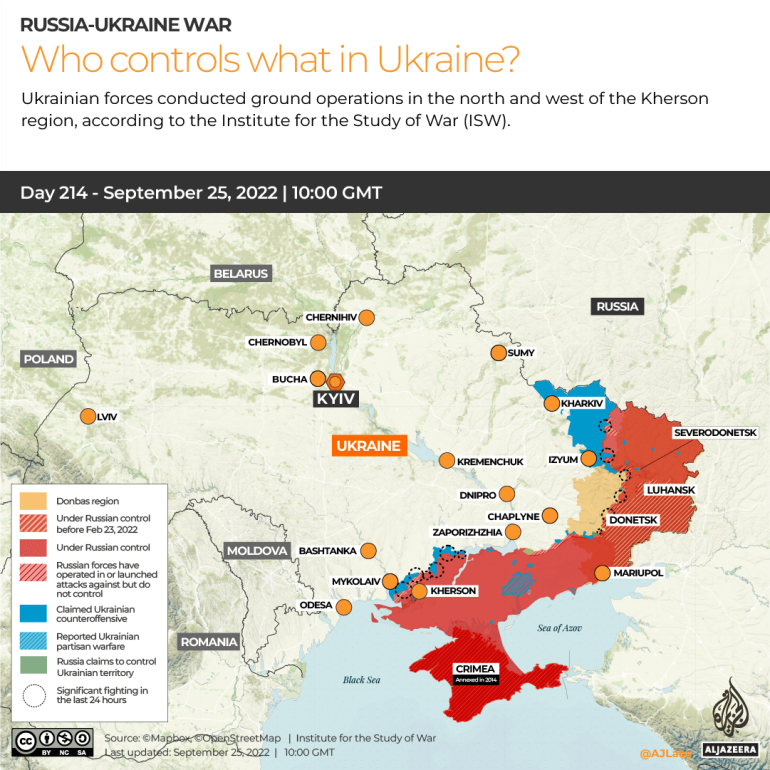 Foreign Minister Sergey Lavrov made the point more directly at a news conference on Saturday after addressing the United Nations General Assembly in New York City.

Asked if Russia would have grounds for using nuclear weapons to defend the annexed regions, he said Russian territory, including territory “further enshrined” in Russia’s constitution in the future, “is under the full protection of the state”.

In his speech, Lavrov sought to justify Russia’s seven-month war in Ukraine, repeating Moscow’s false claims that the elected government in Kyiv was illegitimately installed and filled with neo-Nazis.

He cast opposition to what Russia calls a “special military operation” as limited to the US and countries under its sway, although nearly three-quarters of states in the UN assembly voted to reprimand Russia and demand it withdraw.

Ukraine and its allies have dismissed the referendums as a sham designed to justify an escalation of the war and a mobilisation drive by Moscow after recent battlefield losses.

Russia says the referendums, hastily organised after Ukraine recaptured swathes of the northeast in a counteroffensive this month, enable people in those regions to express their view.

The territory controlled by Russian forces in the four regions represents about 15 percent of Ukraine, about the size of Portugal. It would add to Crimea, which Russia claims to have already annexed in 2014, and which is nearly the size of Belgium.

Ukrainian forces still control some territory in each of the four regions, including about 40 percent of Donetsk and Zaporizhia’s provincial capital. Heavy fighting is under way along the entire front, especially in northern Donetsk and in Kherson.

Ukraine’s Air Force on Sunday posted footage of what it said was the “destruction” of an Iranian drone-kamikaze Shahed-136, which it claimed Russia sent to the southern Ukrainian city of Mykolaiv.

In a statement, the Air Force Command said its anti-aircraft missile had “destroyed the Shahed-136 kamikaze drone, which the Russian occupation forces tried to use to attack Mykolaiv”.

Shahed-136 drones supplied to Russia by Iran were already in use for several strikes in Kharkiv, Dnipropetrovsk, Odesa, and Mykolaiv regions, according to officials.

Earlier on Friday, Ukrainian President Volodymyr Zelenskyy condemned Iran for supplying drones to Russia and said that the Iranian ambassador to Ukraine was deprived of accreditation following the strikes.

Zelenskyy also said in an interview broadcast on Sunday that Ukraine had received sophisticated air defence systems from the US.

It was the first acknowledgment that Ukraine had received the National Advanced Surface-to-Air Missile System (NASAMS) long sought by Kyiv and approved for shipment by Washington late last month.

Zelenskyy also thanked the US for HIMARS and other multiple rocket-launching systems enabling Ukraine to advance against Russian occupying forces.