Portugal manager Fernando Santos said Ronaldo’s place in the remainder of the World Cup still had to be ‘defined’.

The world of football punditry was ablaze with speculation and opinion after Portugal’s superstar striker Cristiano Ronaldo – wearing a substitute’s bib – sat out most of the Portugal vs Switzerland World Cup game that saw the Portuguese side stride into the quarter-finals with a 6-1 win.

Adding fuel to the fire on Tuesday, Portugal’s manager Fernando Santos said Ronaldo’s role for the remainder of the World Cup tournament is still to be “defined”.

When asked directly if Ronaldo would play against Morocco in the quarter-final showdown on December 10, Santos replied bullishly: “Ronaldo will definitely (be involved), all the players on the bench can be used, if they are not in the starting lineup, they can play later.

“It is important to look at the example of this player’s history, he is one of the best players in the world at playing professionally, being captain – all we have to do is think about this team collectively,” he said.

But, earlier, Ronaldo cut a solitary figure as he walked off the field following the match against the Swiss in which he was far from the centre of attention.

Chants of “Ronaldo! Ronaldo!” had swept around the 89,000-seat Lusail Stadium – the biggest stadium at the World Cup – and then loud jeers when the fans realised their idol wasn’t starting for the team.

Ronaldo had come off the bench very late in a game that moved Portugal into the quarter-finals and saw his 21-year-old replacement, Goncalo Ramos, score a hat-trick in his first full debut for Portugal’s national team. It was also the first hat trick of the World Cup tournament.

Ronaldo, 37, congratulated Ramos at midfield at the end of the match, then walked towards the Portugal section of fans and briefly clapped in their direction. But, as the rest of his squad had their moment of fan appreciation, Ronaldo left his teammates behind and walked off alone through the tunnel – perhaps wondering where his career goes from here.

He is currently without a club after leaving Manchester United midway through the World Cup, and he does not appear to be assured a place in the forthcoming quarter-final.

Ronaldo breezed through the post-match interview area with a huge grin on his face, only responding to one question: Was he happy?

“Of course, of course,” the superstar grinned. “Portugal won.”

But it’s not all smiles inside the Portugal camp.

As a writer for an Indian sports magazine asked: “Can one man’s absence make a team better? The answer might not be the one that Cristiano Ronaldo fans want to hear.”

‘Those issues have been solved’

Portugal’s manager Santos had expressed frustration with Ronaldo the day before he was benched for the Switzerland game.

Santos said the decision was tactical and not disciplinary, but he had acknowledged on Monday that he was bothered by Ronaldo’s poor attitude after he pulled him late in a 2-1 loss to South Korea in the final of the group games.

“I think those issues have been solved. I said that in my last press conference and I repeat myself: This is something which is finished, solved,” Santos said.

“I have a very close relationship [with Ronaldo]. I have known him since he was 19 years old in Sporting,” he said.

“I think Ronaldo and I never misinterpret the human and personal aspect with that of manager and player, and what we need to do during the match,” he added.

“That is what we will do. I will always consider he is a very important player to have in the team.”

Dropping Ronaldo from the lineup on Tuesday, Santos started Ramos, a little-known forward who made his international debut just three weeks ago.

But what a start it was: Ramos scored on just his fourth touch of the game in the 17th minute to give Portugal a 1-0 lead. He then added goals in the 51st and again in the 67th minute.

“Not even in my wildest dreams did I think about being part of the starting team for the knockout stage,” Ramos said through a translator after being named player of the match.

Those three goals instantly made Ramos one of international football’s hottest prospects though many may not have even known his name before Tuesday.

Standing in for Ronaldo has changed everything. 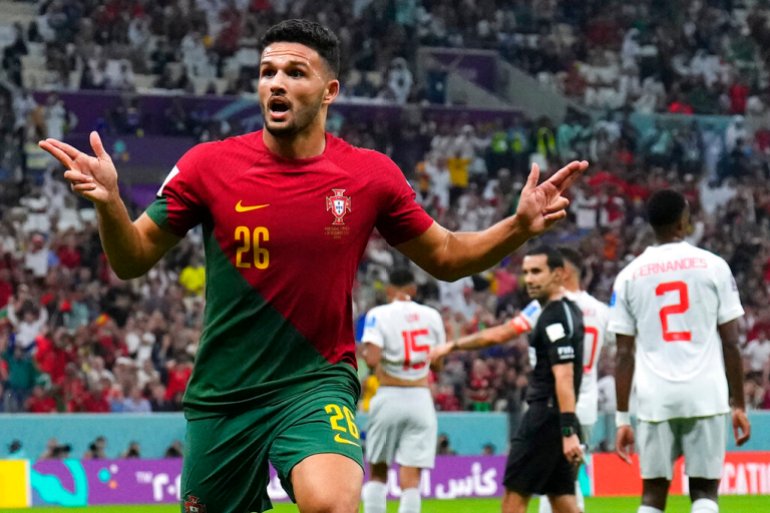 “Most people in the world had never heard about him until today,” Portugal midfielder Bruno Fernandes said of Ramos after the match.

Fernandes was also the only member of the Portugal squad to indicate that Ronaldo was displeased at being benched. He also seemed prepared for the controversy surrounding Ronaldo and stood firm in defending him as a Portugal team representative tried multiple times to pull him away from reporters.

“We won the first two games with Cristiano in the first 11, and it could be that if Cristiano played, he could score three goals and no one would be speaking about Cristiano being on the bench,” Fernandes said.

“I don’t think people should be talking about Cristiano and why he’s not playing, because when Cristiano plays and the team wins, no one talks about that,” he said.

“When Cristiano plays and the team loses, everyone talks.”

Fernandes called Ronaldo “the most famous player in the world. No one is more famous than Cristiano in sports, not in football, in sports.”

When asked about Ramos’s reaction to getting the start, he defensively turned the question towards Ronaldo.

“Do you think anyone likes to be on the bench?” Fernando said. “I don’t think Cristiano would be happy. If the manager put me on the bench in the next game, I would be angry.”

Asked if Ronaldo spoke to him before the game, Ramos said the issue of being benched did not come up among the players.

“Honestly, in our team, no one talked about it. Cristiano as our captain, as he always did, he helped us, he gave encouragement to us, not only to myself but our team-mates.”

Now with the crucial quarter-final match against Morocco on Saturday, Santos may have to decide whether to stick with Ramos or restore Ronaldo – the top scorer in men’s international football and one of the game’s greatest-ever football players.

Santos’s choice will be watched closely for more signs of one star rising and another fading.