(CNN)Russian President Vladimir Putin’s past came into sharper focus recently with the admission that, in the tumultuous days following the collapse of the Soviet Union, he earned cash on the side as a taxi driver.

“Sometimes I had to moonlight and drive a taxi,” Putin said in an excerpt of an interview for “Russia. New History,” a state television documentary. “It is unpleasant to talk about but, unfortunately, this took place.”
The disclosure, in fact, tells us very little about the post-Soviet fortunes of the former KGB officer. It was fairly common in the economic free-for-all of the 1990s for Russian drivers to pick up passengers for a few extra rubles. In the days before ride-hailing apps, all you had to do to was flag down a passing car and agree on a fare.
Putin’s taxicab confession, then, was not a moment of candor — the Kremlin, after all, closely guards the real details of his personal life. But this minor biographical aside does reveal something about Putin’s overarching political goal: To rewind the tape to 1991 and compose an alternative script for the decades that followed. 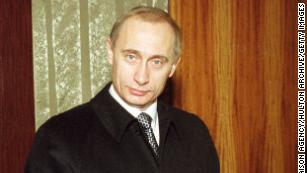 Putin rues Soviet collapse, says he moonlit as a taxi driver to survive economic crisis
“We turned into a completely different country. And what had been built up over 1,000 years was largely lost,” Russia’s longtime leader lamented in the interview.
In recent months, Putin’s pet project has been an attempt to rewrite one of the most significant chapters in recent European history: The appearance, in 1991, of a sovereign and independent Ukraine — right next door to Russia.
Back in June, during a nationally televised call-in show, Putin pronounced that Ukrainians and Russians were a “single people.” He then elaborated on the subject in a 5,000-word article that lamented the “artificial division of Russians and Ukrainians.”
Stripped to its essence, Putin’s argument was that Ukraine and Ukrainians are part of a larger “historical Russia” — and that modern-day Ukraine, which gained independence in 1991, was merely the by-product of administrative and territorial boundaries cooked up by the Soviet leadership.
The Russian president made no mention, of course, of the millions of Ukrainians who voted overwhelmingly in support of independence.
No, in Putin’s view, post-Soviet Ukraine became a tool of the West for weakening Russia.
“Ukraine was dragged into a dangerous geopolitical game aimed at turning Ukraine into a barrier between Europe and Russia, a springboard against Russia,” he wrote. “Inevitably, there came a time when the concept of ‘Ukraine is not Russia’ was no longer an option. There was a need for the ‘anti-Russia’ concept which we will never accept.”
Put otherwise, Putin seemed to be testing out a historical justification — should the need arise — for regime change in Ukraine. 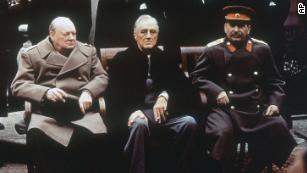 Photos: The history of the Cold War

And in the months that followed Putin’s foray into history, the build-up of Russian troops on the border with Ukraine sent a clear signal that invasion was an option very much in play.
Ukrainian security assessments say Russia has boosted troop strength near its borders to 120,000 personnel, and the US has shared intelligence with NATO allies and European partners on troop and equipment movements near Ukraine that US officials believe point to a build-up for a potential invasion.
The Kremlin denies plans to attack Ukraine, and the Defense Ministry says “regular” winter military drills in the military region that partly borders Ukraine are taking place.
And on Thursday during his annual marathon news conference, Putin told gathered domestic and international journalists, that Russia does “not want any military action” but pointed the finger at the US and NATO.
“We asked directly that there should be no further NATO movement to the East. The ball is in their court.” He later added, “I feel like we are on different planets sometimes.”
Call it self-pity as foreign policy. The humiliations of the 1990s — from the loss of superpower status to a side hustle as a taxi driver in St. Petersburg — serve to justify Putin’s Great Russia restoration project.
To be sure, Putin’s grievances over Ukraine are nothing new. He sounded the same themes in his 2007 speech at the Munich Security Conference: The duplicity of an expanding NATO alliance right on Russia’s doorstep and the hidden hand of the West, stirring up street protests in Ukraine.
The president may be playing amateur historian, but his historical memory is decidedly selective.
Prosecutors in Putin’s Russia have moved to shut down the International Memorial Society, a respected civic organization dedicated to documenting and educating the public about the history of Soviet totalitarianism, including the Gulag system of forced labor, the imprisonment of dissidents and the waves of executions that took place in the USSR. 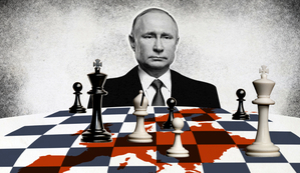 Checkmate. Putin has the West cornered
In his recent Nobel Peace Prize lecture, Russian investigative journalist Dmitry Muratov defended Memorial, calling the organization a “friend of the people” — a fair characterization of an organization that wages an often lonely struggle to preserve the memory of the Soviet system’s victims.
Memorial has been designated a “foreign agent” by the Kremlin.
Muratov also had something to say about Putin’s favorite subject, Ukraine, saying Russia’s backing of separatists in the country’s east had actually scuttled the chances for Russian-Ukrainian friendship.
“Moreover, in [the] heads of some crazy geopoliticians, a war between Russia and Ukraine is not something impossible any longer,” said Muratov, who covered the conflict in Russia’s breakaway region of Chechnya in the 1990s. “But I know that wars end with identifying [dead] soldiers and exchanging prisoners.”
That’s not to say that Putin will invade Ukraine. Pressed in late October about how he proposed to stop NATO’s potential expansion into the Eastern European nation, Putin said: “Unfortunately, I will probably have to disappoint you — I do not yet know the answer to this question.”