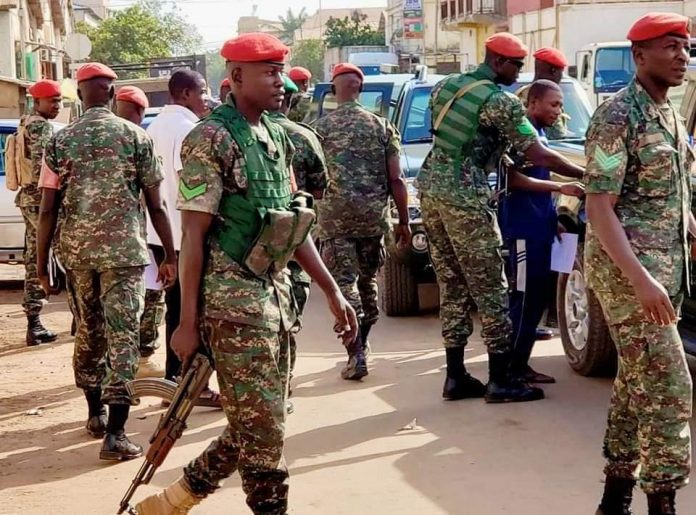 The Eight Soldiers of the Gambia Armed Forces, accused of attempting to overthrow the democratically elected government of President Adama Barrow, have appeared before a high court Judge in Banjul.

The December 2022 alleged coup plotters trial kicked off before Justice Basiru V.P Mahoney as the presiding judge of the case at the Banjul High Court on Wednesday, January 17, 2023.

The case earlier started at the Banjul Magistrate Court before being transferred to the High Court, as the former lacked the power to hear such criminal cases. However, all the accused persons were initially charged with “treason and conspiracy.”

At the beginning of the hearing, the Counsel for the State, Abdul Maita Yusuf, told the court they are yet to file a bill of indictment of the case and appealed to do so against the (8) alleged coup plotters at soonest.

“By practice directive one of 2013, a transfer case to the high court requires a fresh bill of indictment,” Counsel Yusuf said.

“As the case is coming for the first time, we would indulge the court to allow us time to file the bill of indictment before the next adjourned date,” he told the superior court in Banjul.

Yusuf also argued that the case would only be able to proceed if two of the accused persons were with lawyers to represent them on the first day of the hearing.

Reacting to the application of the State Counsel, Lawyer Lamin S. Camara, representing accused persons Sanna Fadera and Ebrima Baldeh, raised concerns over the delay in filing the bill of indictment.

“They were detained since December 2022, and in the coming three days, they would have one month in detention,” LS argued.

“They were arraigned before the Banjul Magistrate Court and were charged and remanded. So it is not an excuse that they are coming for the first time today,” he added.

LS Camara urged the State to immediately put their house to proceed with the trial, arguing that his clients deserve to enjoy their right to a speedy trial.

More or less, the Counsels for three other accused persons, respectively, agreed and made similar submissions to LS Camara’s arguments.

Bakary Njie and Bara Touray, two other accused persons without representatives, promised to provide lawyers before the next adjourned date.

Meanwhile, the matter of three other accused persons, civilians Mustapha Jabbi, Saikouba Jabbi, and Fakebba Jawara of The Gambia Police Force follow-suit and similar appeals and arguments were made.

However, the two cases may be considered for consolidation, which is left to the State to decide.

In his ruling on Wednesday, V.P. Mahoney ordered that a criminal case be accorded with expedite — commanding the State to file the indictment on or before Monday, January 23, 2023.

The presiding judge also ordered the State to serve the bill of indictment to all the accused persons on or before Tuesday, January 24, 2023.