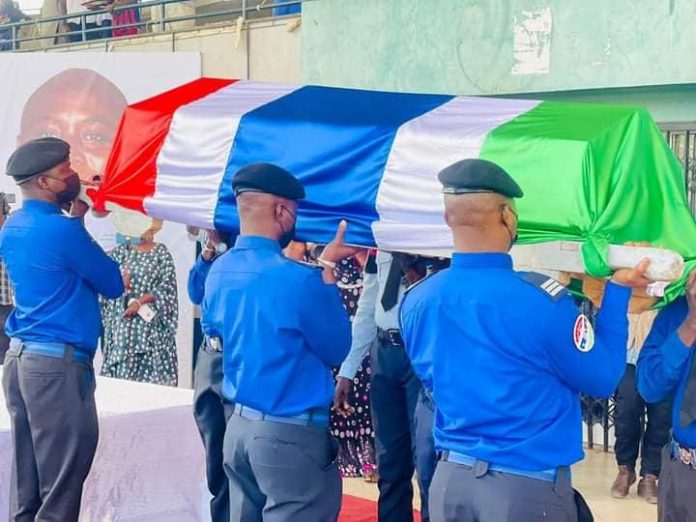 A man highly commended for his heroic efforts and legacy in removing a dictatorial rule for The Gambia, Ebrima Solo Sandeng, has been finally laid to rest on Tuesday, January 10, 2023, six years after his untimely death.

In a state funeral conferred to him at the Never Again Memorial Arch, formerly Arch 22 in the capital city, Banjul, several individuals, including his son, assessed the sacrifice Mr. Sandeng had died for. Solo Sandeng was killed by NIA officers in the service of the Gambian people on April 14, 2016, when he led a peaceful protest for electoral reforms ahead of the Presidential elections in December of the same year.

The body of Solo was later exhumed in 2017 to serve as evidence in the trial of the nine officers of the defunct NIA, now called SIS, who was subsequently found wanting for his murder and were sentenced to life in jail following a judgment made in July 2022.

The remains of Mr. Sandeng were finally handed to his family on Tuesday, January 10, 2023, and he was given an official state funeral and a befitting burial through his religious rites.

While paying last tribute to the renowned political activist, the Secretary-General and Party Leader of the opposition United Democratic Party, Lawyer Ousainou ANM Darboe said giving state funerals or naming monuments after heroes like Solo is not enough recognition for what they had fought for.

“Legislating good electoral laws and, more importantly, by demonstrable conduct manifesting the core principles of freedom and democracy he advocated and truly believed in would be the more befitting tribute,” Darboe said.

Lawyer Darboe underscored that Solo Sandeng remains the catalyst of The Gambia today but died for principles whose validation must go beyond verbal affirmation.

“No Gambian should ever again be a victim of their government. We must all abhor every indication of rights violations and insist on scrupulous adherence to the rule of law,” Darboe appealed.

For a human rights activist, Madi Jobarteh, the day manifested a betrayal from President Adama Barrow and all former 2016 coalition leaders who failed to stand up for what Mr. Sandeng died for.

“It is a shame they all came here trying to show remorse and celebrate Solo but failed to implement the ideals and objectives which Solo stood up for,” Madi stressed.

“A day like today, we should have seen the ideals for which Solo dies are manifested in this country that laws change, that the malpractices in the government stop, that the rule of law is respected, and there are no arbitrary arrest and detentions,” he added.

The son of Solo Sandeng, Muhammad Sandeng, called for Gambians to use this important day of his family to reflect on how far they have come in achieving the true meaning of the sacrifices his father and co have led.

“Are you happy that after seven years, we are here respecting the remains of Solo Sandeng without the electoral reforms he died for?” Muhammed asked.

“If we truly believe that we owe this to Solo Sandeng, then we must do as he wished, and that is to do right by those that entrust to us the responsibility to do right,” he urged.

In continuing the legacy of Ebrima Solo Sandeng, Muhammed Sandeng challenged every Gambian to take it upon themselves to protect and preserve the values of democracy and freedom across the country.