(CNN)On July 1, a cable emerged from the Atlantic Ocean in Swakopmund, a small coastal city in western Namibia. Mostly known as a seaside resort, Swakopmund is used to visitors. But the giant ship out at sea, the string of buoys, and a fleet of smaller vessels manned by workers in hard hats and fluorescent bibs was an arrival of a different kind.

Running for thousands of miles along the bottom of the sea, the cable’s landing had been delayed for months by rough conditions and Covid-19. But now here it was, a couple of inches wide and already covered in sand. A welcome party stood on the beach and posed for photos before the cable continued inland. Equiano had finally arrived.
Equiano is the latest subsea internet cable financed by Google. Starting in Portugal and eventually ending in South Africa, with branches to Nigeria, Togo, the islands of St Helena, and Namibia, the 15,000-kilometer (9,320-mile) cable is designed to deliver high-speed broadband along the west coast of Africa. Its capacity, a whopping 144 terabits per second, is 20 times that of the previous cable serving the region and could increase internet speeds more than fivefold in some countries. 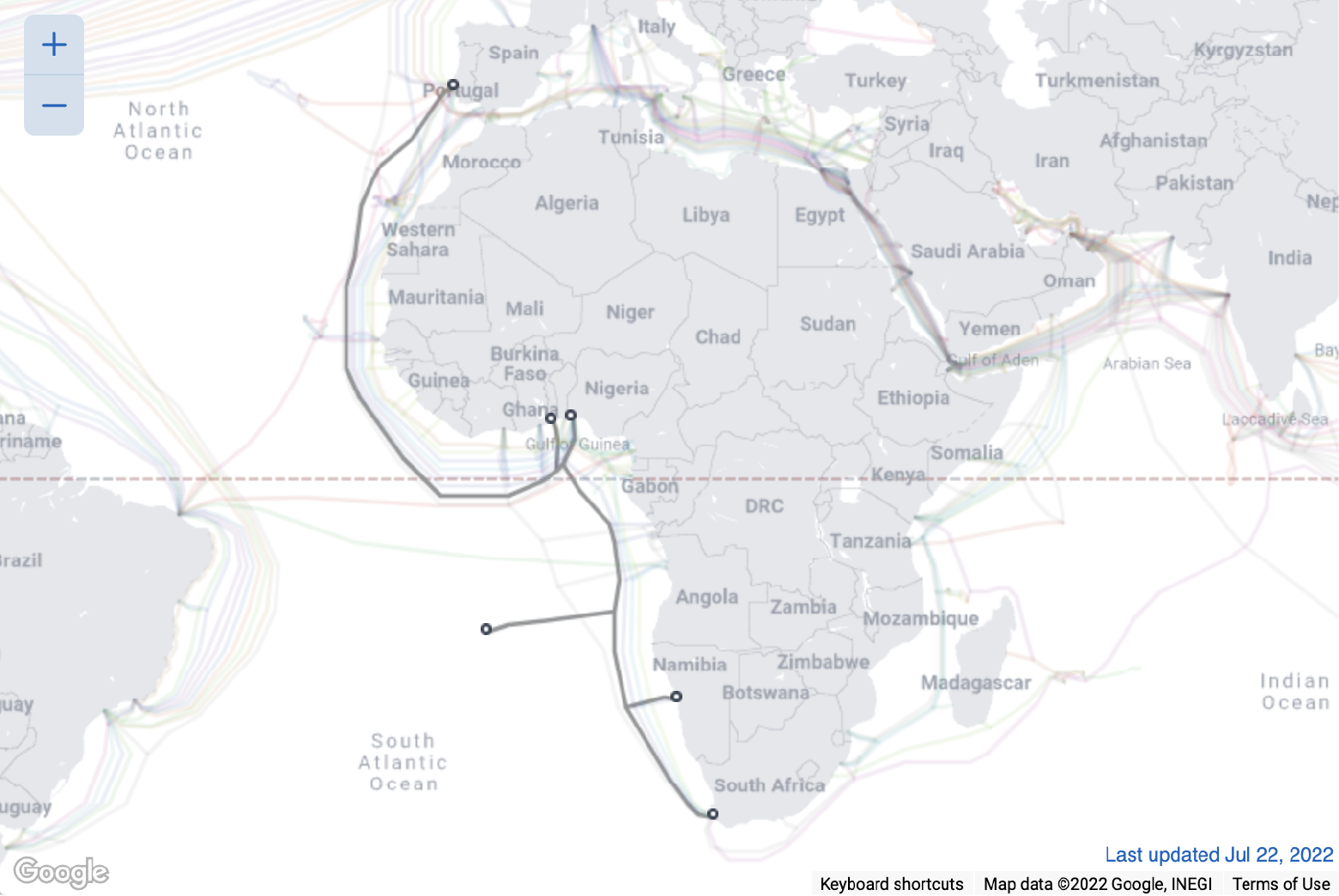 Once completed, Google’s new subsea internet cable Equiano will stretch from Portugal to South Africa, with branches going to Nigeria, Togo, Namibia and the islands of Saint Helena. This map from TeleGeography shows the approximate Equiano route. View the complete interactive map here. Credit: Google via TeleGeography
Named after the Nigerian-born 18th century writer and abolitionist Olaudah Equiano, the cable could prove life changing for some.
Barney Harmse was among those on the beach in Swakopmund when the cable landed. He is the CEO of telecommunication company Paratus Group, which worked alongside Telecom Namibia to deliver the country’s 500-kilometer branch of the cable. “We’re excited as hell, I must say,” he told CNN prior to the landing. “It’s going to have an enormous impact on our part of the world.”

Telecommunications has come a long way since the first subsea telegraph cable in 1858. As of 2021 there were over 1.3 million kilometers of subsea cable around the world, carrying over 95% of intercontinental internet traffic. But internet access is still highly uneven. In sub-Saharan Africa, internet use is the lowest of any region in the world, broadband coverage is significantly lower than global averages, and high data costs have proved a barrier to adoption, according to the World Bank.
To provide universal good quality, affordable broadband across Africa by 2030 would cost an estimated $109 billion, according to the Broadband Commission for Sustainable Development. The economic impact of that investment would be profound. Fewer than 25% of Africans use the internet, but if the percentage was raised to 75% (roughly the same as Cuba or Moldova) it could increase job creation by nine percent, it says.
Google will not disclose the total value of its investment in Equiano, but Paratus said the deal between Google, Telecom Namibia and itself was valued at 300 million Namibian dollars ($20 million). In October 2021, Google said it would invest $1 billion in Africa’s digital transformation, including connectivity and investments in startups. 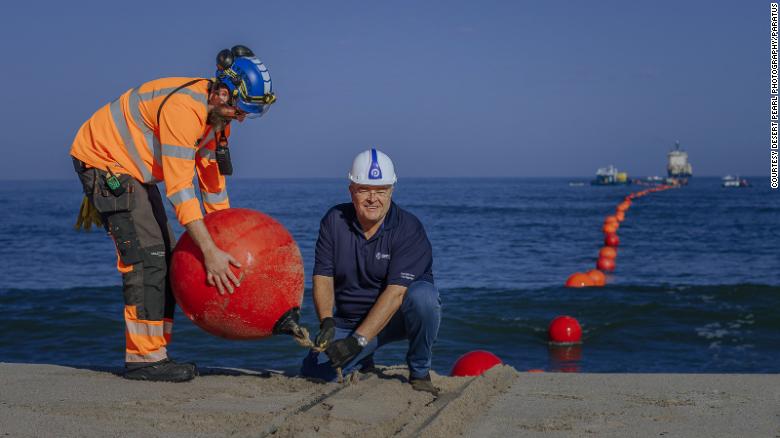 Paratus Group CEO Barney Harmse poses with the Namibian branch of Equiano on July 1, 2022.
The cable is scheduled to start carrying traffic at the beginning of 2023, says Paratus. According to a report commissioned by Google, Equiano will cause data prices to drop between 16% and 21% in South Africa, Namibia and Nigeria, and in the latter could lead to the creation of 1.6 million jobs, driven by the expansion of the digital economy and peripheral sectors.
“With increased internet access, societies can modernize, people can acquire new skills and knowledge that can open doors to new job opportunities, and businesses and governments can increase productivity and uncover new revenue streams as a result of digital transformation,” said Bikash Koley, Google vice president of global networking, in a statement to CNN.
Access does not stop at coastal nations. Harmse says Paratus will connect the Namibian branch of Equiano to its network that spans Angola, Zambia, Botswana, South Africa, Mozambique and the Democratic Republic of Congo (DRC). These countries will “experience an immediate benefit” when the cable comes online, he says.
“We are investing daily to increase infrastructure and capacity going into our landlocked neighbors,” Harmse adds. “It’s not a single project with a specific start and stop (point) … it’s like a beast — an organism that you need to keep on feeding.”
Some of the beneficiaries of that expansion are students. Paratus says it has installed internet connections in educational facilities collectively teaching over 10,000 students in Namibia as part of the EduVision program, which provides smartboards and e-learning technology to schools, particularly in rural areas.

The race to connect

There are more cables to come — work is underway on 2Africa, a 45,000-kilometer subsea cable encircling the African continent and connected to Europe and Asia, funded by a consortium led by Meta (formerly Facebook). The cable landed in Genoa, Italy in April and in Djibouti in May. 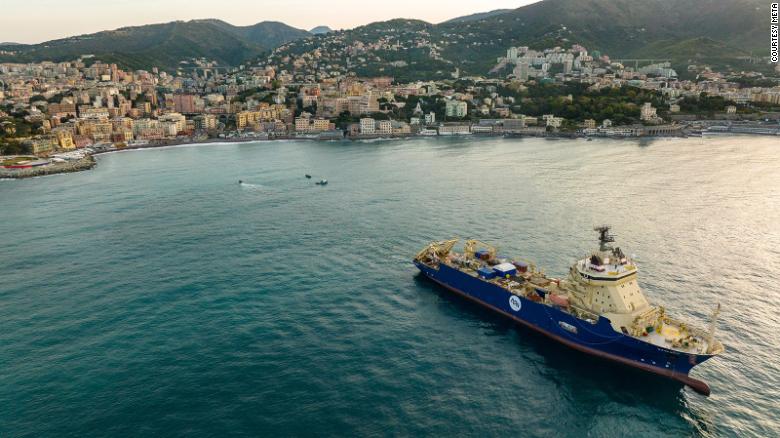 2Africa, a 45,000-kilometer (28,000-mile) subsea cable that will encircle Africa and connect to Europe and Asia, landed in Genoa, Italy earlier this year.
The continent will need both cables and more as internet use grows, and older cables become obsolete or reach the end of their operational lifetime.
Alan Mauldin, research director at telecoms market research firm TeleGeography, says demand for international bandwidth in Africa tripled between 2018 and 2021, and that by 2028, demand will be 16 times greater than it was last year.
While intercontinental cables will continue to play a significant role in Africa’s internet future, so too will homegrown data centers. Storing more of the internet’s data in Africa and positioning data centers closer to end users will speed up response time and decreases data costs, explains Harmse. “It’s the next big thing,” he says, adding that Paratus’ latest data center, an $8 million project in Namibia’s capital Windhoek, will be completed in August.
In the meantime, Equiano continues its journey towards South Africa, its final destination, while engineers work to link its branches to Western Africa’s ever-growing network.
“The race is on,” says Harmse. “Africa is the continent to connect.”
Source: CNN