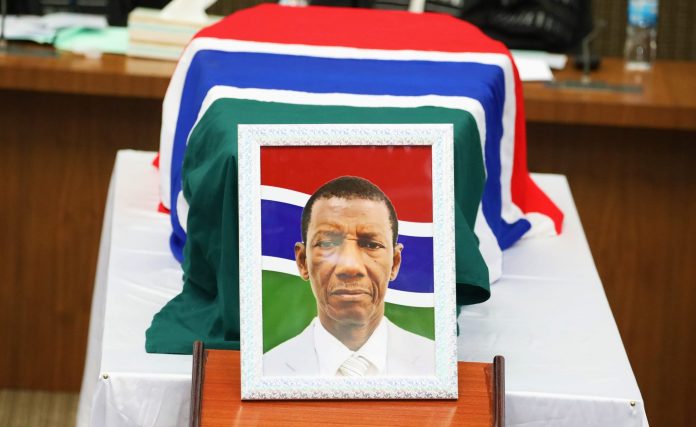 The late Vice President of The Gambia, Dr. Badara Alieu Joof, has been laid to rest today at his former residence in Banjulinding at 14:00pm.

VP Joof died in India of a brief illness on Tuesday, 17 January 2023, as announced by the government.

A grand national lying-in-state preceded the interment at the National Assembly attended by President Adama Barrow, cabinet ministers, the Speaker and National Members, diplomatic and consular corps, and the cross-section of the society.

Muntaha Faye, Deputy Imam of Banjul, prayed for the departed soul to rest in perfect peace, as many sympathizers hailed him for his good deeds and love for country and humanity.

Addressing the nation at the National Assembly as he paid his last respect to the revered Vice President Badara Alieu Joof, President Barrow extolled his former deputy for his profound knowledge, expertise, and wisdom and the value he brought to his government.

He said he would remember VP Joof for his uprightness, truthfulness, and seriousness in work. He equally expressed admiration for the late VP Joof’s eloquence, articulatory prowess, and depth of knowledge and experience in academia and governance that merited international recognition, as evident in his deserved work at the World Bank.

President Barrow recalled: ” In one of his speeches, he said he did not mind losing his job for telling the truth; he merely emphasized this principle. Badara was a principled gentleman who could never walk out of any job nor betray the confidence I reposed in him.”

Speaker Jatta said the late VP Joof was his schoolmate at Armitage High School and a College mate at the then Yundum College, and since then, they both continued to work for The Gambia in different capacities.